HEALING HOOVES IN THE MEDIA

Recent videos and articles – please contact us to arrange an interview for your publication, we love getting the word out

Equine Facilitated Counsellor Sue McIntosh works with a client and a horse at the Healing Hooves facility near Cremona, Alta., Monday, Jan. 24, 2011.

CREMONA, Alta. — What is it about girls and horses?

Whether raised as country or city girls there is something about the grace and elegance of the noble horse that tends to appeal to females of all ages.

They apparently are also excellent listeners.

Kayleigh was only 12 when she gave up on traditional counselling and started to break down.  “My Mom has depression and anxiety and I walked in on her trying to kill herself so that’s pretty hard to deal with when you’re about 10 years old. After that I kind of shut down,” she said softly.  “So I went to Sue at 12 talking about my Mom. Then when I was 14 my parents were getting divorced and then it was, ‘Now what?”‘

“I’m perfect now,” she said with a giggle.

“Sue” is Counsellor Sue McIntosh, who set up Healing Hooves near the tiny community of Cremona, northwest of Calgary, more than a decade ago and practises Equine Facilitated Counselling and Animal Assisted Therapy.  Since then more than a thousand troubled teens, most of them girls, have discovered that while it is next to impossible to talk about your demons — a horse can work wonders.

“I knew that I couldn’t have got through being a teenager without my horse and I knew even as an adult my horse is what kept me sane,” said McIntosh with a smile. “I just wanted to share that with people.”

About 60 per cent of the clientele are referrals from social services and the remainder from private placements.

They all have one thing in common. They are looking for ways to deal with their personal problems that traditional counselling could not provide.

“You sit there and they make you draw pictures or they ask you to try and identify things through toys. You don’t want to be there anyway but you know you’re there to talk but you don’t want to talk,” sighed Kayleigh.  “The minute I got on that horse I was a totally different person. It’s quite amazing.”

McIntosh said a laid-back and indirect approach and time spent with the horses can get her clients to open up. Often her approach is seen as a “last resort” for kids who have had bad experiences with traditional counselling.

There are a series of messages scrawled on what is referred to as the Graffiti Wall from individuals who have left the program. “I will keep myself safe by following my instincts,” reads one of the messages.  Others talk about finding a safe place and who to turn to if they are afraid.

“We need to be letting someone take care of us. We need to be resting with someone who cares about us and who we trust. That peace seems to be missing from so many peoples lives.”

“What I like about talking to horses is — it may sound crazy — it’s because they can’t talk back. They can’t tell you, ‘That was stupid,’ or ‘Don’t worry about it.’ They’ll just sit there and listen to you. They have no negative comments.”

A personal relaxation exercise was taking place on this day. “We’re going to use that side to side (of the horse’s movement) to create a calm place in your mind. It’s going to be something you can use when you feel overwhelmed or stressed” said McIntosh as she led the horse in a circle around the arena.  “What I would like you to do is think of a time or place where you felt completely calm and safe. Can you find this place?,” she asked.

Susan, who is 17 and living in Calgary, has been a client of Healing Hooves for years. Traditional counselling did not work for her.  “I made no progress at all,” she said.  “They (the horses) can pick up on how you feel and they react to it. You can tell from the reaction of the horse how you feel inside. It makes you realize how you feel,” Susan added.  “When we talk about the horses’ feelings most of them are rescue horses and they’ve had some sort of bad history in the past. We help them and they help you.”

McIntosh confirms that some of her horses had been abused themselves and serve as a “parallel” that the clients can relate to.

Amanda, who is also 17, said there was something about getting on horseback that made her want to talk to Sue.  “I wouldn’t say I told her everything right away but I started with little things to see what she did with that and monitoring her responses just to make sure that I could trust her.”  “At the time I didn’t know who she was. I was a little afraid of the horses and now I can tell her just about everything,” said Amanda, who lives with her aunt.  “Amanda has become much more confident, more assertive and just more trusting. I think that’s the biggest thing,” her aunt said proudly.  “She trusts herself more, she trusts me more and it probably is because of Sue and the horses.”

McIntosh said there are no overnight successes. She said it is not always possible to deal with the real, underlying cause of the pain right away.  “A lot of the kids I have worked with have experienced some awful things,” McIntosh said.  “I have learned sometimes it is so painful and the feelings attached are so intense if you try to rip those defences down you’re going to do more harm than good.”

“They might not be able to talk about it all until they are 45.”

It’s been nearly a decade since Kayleigh Hurley first met Skye. They’ve grown to be very close friends – but Skye isn’t just any kind of friend – she’s a horse. 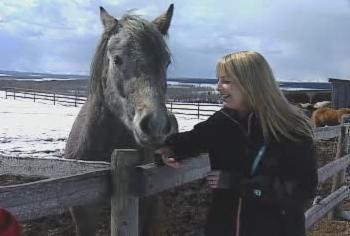 CALGARY – Spending some quality time with animals can make even the worst day a little better; a sentiment shared by more and more psychologists who are using animals to help their patients heal.  That includes everything from fuzzy puppies and kittens to our hoofed helpers.

It’s been nearly a decade since Kayleigh Hurley first met Skye. They’ve grown to be very close friends – but Skye isn’t just any kind of friend – she’s a horse.

Skye and the other horses she lives with work with therapist Sue McIntosh to help young women like Kayleigh deal with emotional challenges.

Equine therapy has been growing in popularity since the seventies. At Healing Hooves, Sue works with children and adults with a wide range of problems.

“Women with eating disorders often talk about this desire to control their bodies and kind of police them and so the interaction through the horses, you really need to let this desire for control and perfection fall away,” says Sharpe.

The six week pilot study gets underway next month and will take eight participants through a group therapy program using Sue’s crew.

While research has shown equine therapy can be successful, Hillary’s study will look at why.

“I’m going to be asking questions like what was it about your experience with the horses that you found helpful or what kind of moments made a difference for you.”

Kayleigh, whose struggles were not eating related, believes others can benefit from working with horses.

For her, Skye helped in a way she says was not possible with other forms of therapy. “You build more trust. I think that if I would have met Sue in a therapist office, I don’t think we would have really bonded. They get you to draw pictures and analyze what you’re feeling but when you’re with the horses, you can’t hide,” says Kayleigh. 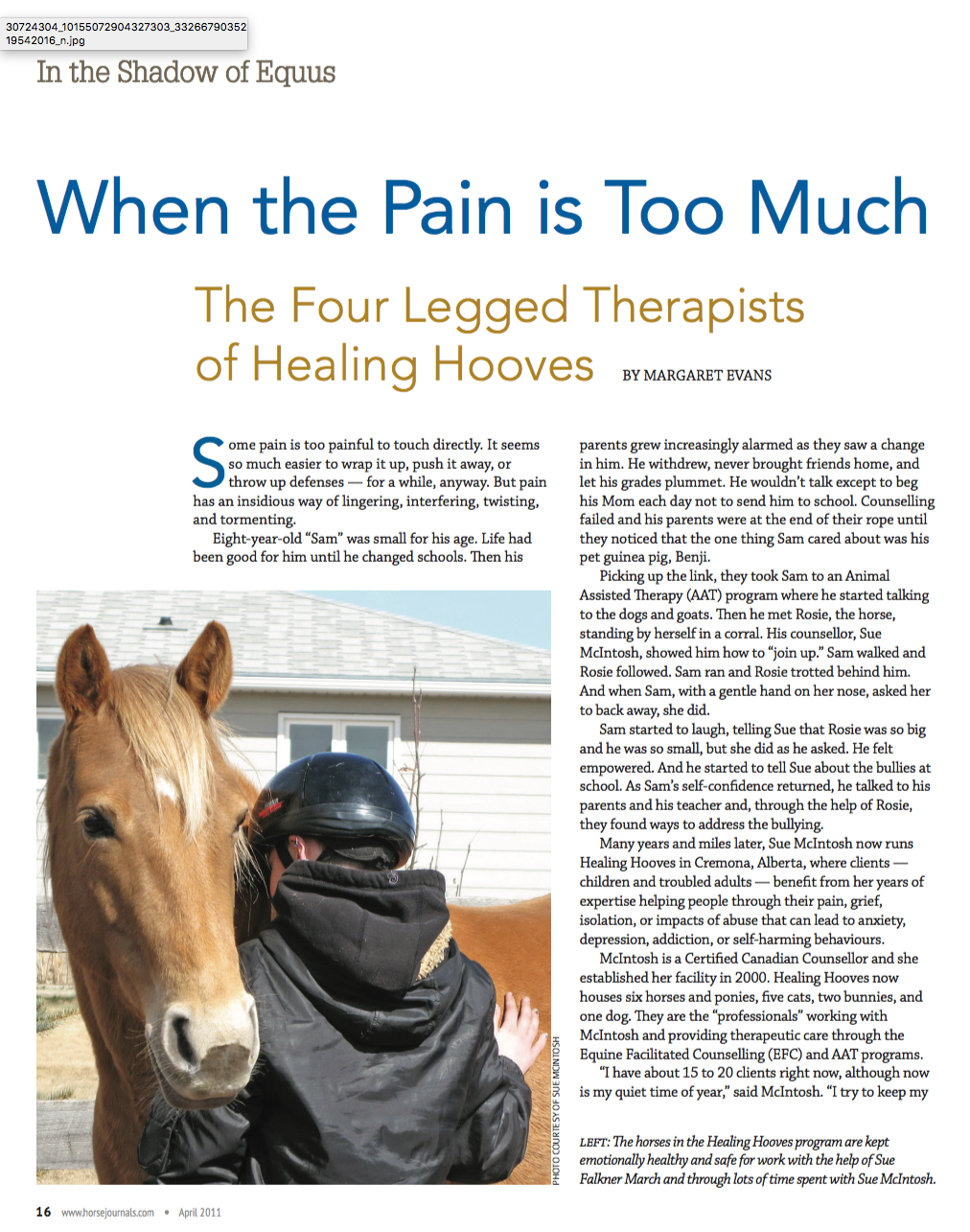 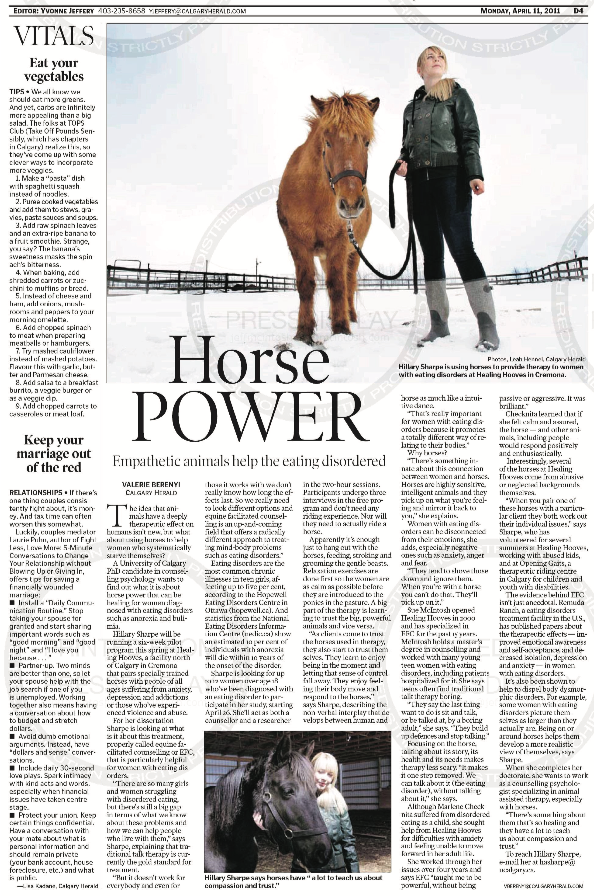 CURRENT ARTICLES AND YOUR QUESTIONS ANSWERED