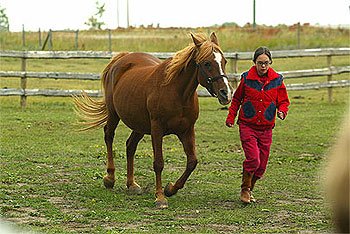 ‘Natural Horsemanship’, ‘Horse Whispering’, ‘Non Resistant Horsemanship’ and more, are some current terms describing natural approaches to working with horses. Such approaches have recently become popular and are proving successful in equestrian fields. Well known proponents include Tom Dorrance, Ray Hunt, John Lyons, Pat Parelli, Monty Roberts and Linda Tellington Jones. To save confusion I use the term ‘Natural Horsemanship’ to encompass all of these more natural approaches to working with horses. As a mental health professional, I find that integrating aspects of natural horsemanship into my approach facilitates my clients’ experiential learning and growth. All within an environment which supports the value of play. In this article I specifically discuss the ‘seven games’ which form part of the Parelli Natural Horsemanship program, and the ways in which I drawn upon these in my work as a counsellor in Canada.

With natural horsemanship approaches, a person approaches and communicates with the horse the way horses have been relating to each other for centuries. This requires the human to see things from the horse’s perspective; to understand the horse’s position as a prey animal. It requires a new philosophy and approach to horses, built upon mutual trust and respect.

Every time I attend a clinic, demonstration or watch a documentary of someone’s approach to natural horsemanship the same thoughts always come to mind. So much of this is just so transferable to people. Every time I hear someone’s testament about how they used to try to ‘make’ their horse, or they were a push over who never gave their horse enough guidance, the same questions pop insistently into my head: How were they with their kids? Their peers? With themselves? And by the time they state that now they have seen the light and have a new approach with their horse which is so much more successful and rewarding for all involved …. I’m itching to jump out of my seat and point out the learning opportunities which seem so abundant and clear. Of course I don’t, but I do trust that at some level these transfers happen naturally; as they do for me when I need to learn something from my horses. Herein lies the foundation of my approach to Equine Facilitated Counselling.

I am not endorsing any particular approach to natural horsemanship for horse training or Equine Facilitated Counselling purposes. In my mind they all follow the same basic principals. Each with their own areas of specialty, personal touches and marketing package. I don’t believe anyone who might claim to have ‘invented’ this way of working with horses; I think the horses ‘invented’ it all many thousands of years ago; we’re just starting to catch up with them. My approach has been to learn as much as I can from as many ‘experts’ as I can, then to take what works and makes sense for me into an approach which fits with who I am. Most importantly I try to learn as much as I can directly from my horses. That said, I have studied under the Parelli Natural Horsemanship (PNH) program and found that the ‘seven games’ integral to this program, are readily transferable to my work with clients. The ‘seven games’ also fit in very well with my beliefs around the value of play.

Importance and the role of play

Horses know the importance and value of play – just watching them in the field can show you that; and play is a child’s natural form of expression. In play there are no winners and losers, just participants, because it is not a contest. Researchers have shown that play is important for learning and socialization. Evolution knows the value of play because even though it has a cost, e.g. exerts energy, it has been retained in the lives of animals. Except for those of most adult humans; when human adults ‘play’, it is usually a structured ‘game’ with set rules, and results in a winner and a loser. When we participate in ‘free’ play we are freed from these constraints and can feel joy, wonder, creativity, curiosity and optimism. By playing the seven games with horses clients can rediscover and experience all of these emotions and at the same time learn and grow as nature intended.

The PNH program uses seven ‘games’ which you can play with your horse: the friendly game; the porcupine game; the driving game; the yo-yo game; the circle game; the sideways game; and the squeeze game.

Underlying concepts from PNH games which can be drawn upon therapeutically

So how can you apply the PNH games to an Equine Facilitated Counselling program? The power is in the metaphors presented when you play the games, the relationship between the horse and the client, and the immediacy of the response provided by the horse. My job as counsellor is to facilitate a safe (physically and emotionally) interaction; gently guide the process, and to let my horses work their magic. Some specific examples are as follows:

Building trust through the friendly game

The friendly game involves rubbing the horse gently all over, noticing and backing away when the horse is uncomfortable or afraid, and gradually earning his trust. The objective is for the client and horse to build trust with one another. This does not happen automatically – the client may have stopped trusting, and the horse’s prey animal instinct is to fear and mistrust. By understanding this and by taking a different approach, a client can learn that trust takes time and needs to be earned, but is possible and rewarding.

Earning respect through the porcupine game

Like trust, horses do not automatically give you their respect – you have to earn it. Respect has no fear in it, but is a willing and cooperative attitude built upon trust. In the porcupine game the objective is for the horse to move – forwards backwards, sideways, up and down – from a very gentle touch. In other words the horse does what you ask out of respect, not fear or force. By playing the porcupine game, the client can experience earning the respect of the horse, and can then explore what respect means in human relationships.

Establishing boundaries through the yo-yo game

Establishing boundaries with the horse, and similarly respecting the horse’s own boundaries can be explored through the yo-yo game. The objective of the yo-yo game is for the horse to willingly back away and come towards you, without knocking you over. The client learns that she can ask the horse to respect her space without the horse becoming angry or unfriendly. The metaphors presented by playing the yo-yo game can be particularly relevant to survivors of abuse.

In the squeeze game, the objective is for the horse to pass between you and an object without being afraid or rushing. By playing this game a client learns to see the situation from the horse’s perspective. Understanding that horses as plains animals are naturally claustrophobic and that going into or through confined spaces may be frightening. Once the client sees it from the horse’s perspective she can with patience, perseverance and understanding help the horse see that there is no danger. There may then be an opportunity to transfer this to other situations in the client’s life, to better understand another’s perspective.

Application of the PNH games in a client situation

‘Karen’ is a fourteen year old who was referred to me with a diagnosis of ADD, behavioural problems at home and at school, and low self esteem. I asked Karen, to try to get Bo, my 24 year old gelding, to walk in a figure of eight around some cones, without touching his halter. On the first attempt Karen tried to push, pull and generally force Bo to complete the task. Bo responded by wandering off in the wrong direction or just standing there and dozing off. I then guided Karen to play some of the above games through which she communicated with Bo, built trust and earned his respect. On their second attempt Bo calmly followed Karen as she led the way around the cones – no pushing or pulling required. In debrief Karen noted that on the first attempt Bo did not understand what she wanted him to do which was frustrating for her and she imagined confusing for him. She then noted that on the second attempt, after they had built a bit of a relationship, he worked with her rather than against her. Karen also got to experience success and a sense of achievement in a job well done.

In summary, evolution, research and our horses all tell us that we can benefit from play. When we introduce our clients to playing natural horsemanship games in an Equine Facilitated Counselling setting, this can open the door to growth and healing through an abundance of metaphors and opportunities.