One (Horse) Step Removed: The Value of Stories 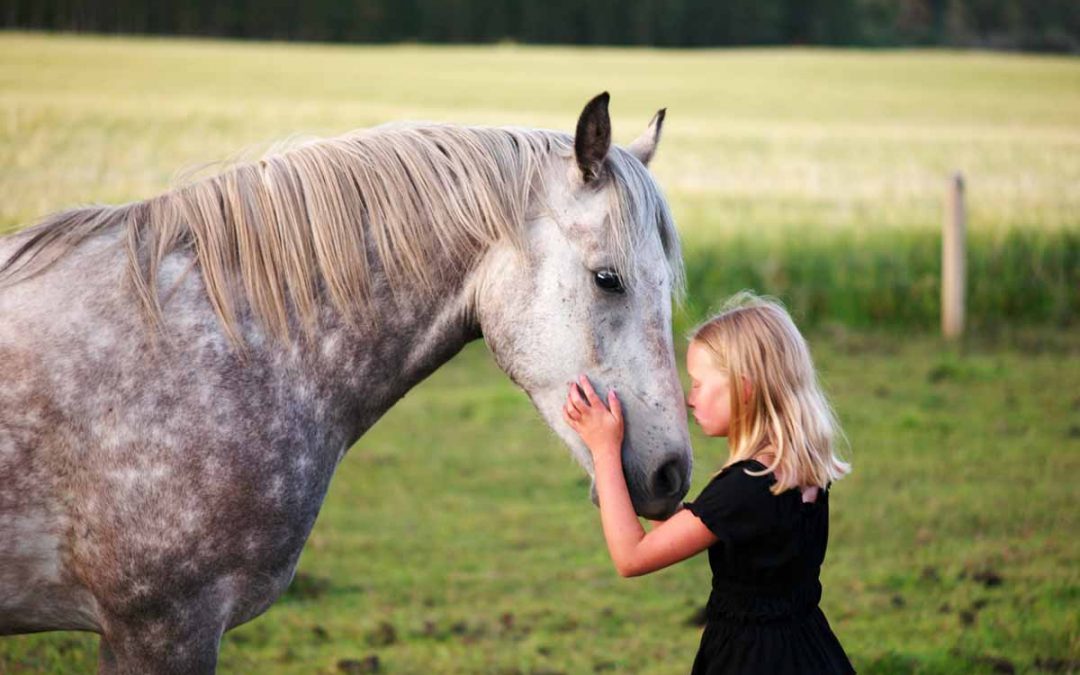 A key aspect of our approach at Healing Hooves is to work indirectly or ‘one step removed’. One way to do this is through interactions and relationships with animals, another is through sharing and learning from the animals’ stories. We have a number of therapeutic stories about the animals at Healing Hooves which we have shared with our clients and other professionals for many years.

Today, I’m sharing why we started writing these stories, and why we work indirectly and experientially at Healing Hooves, rather than taking a more direct approach. While the examples I share below are from our counselling practice, and thus highlight some significant areas of challenge, the gentle indirect approach we advocate are just as effective and necessary in other aspects of parenting and relationship, especially with a sensitive child (or adult!)

The Gentle Power of Being Indirect

Nine-year old Jasmin is brought to counselling by her dad who is worried about her increasing levels of aggression. Jasmin’s father fights back tears. He tells me that Jasmin’s mom died of cancer last year and Jasmin has never cried about it. He is trying his best but works long hours to support Jasmin and her three younger siblings and he just doesn’t know what else to do. In her first session, Jasmin tells me she is ‘bad’ because she hit her baby brother again last week.

Jonathon learned at an early age that the way to survive was to stop feeling. The youngest of four to a mother with fetal alcohol syndrome and an alcoholic father, he is currently living with his grandparents and was just expelled from school – the third this year – for smoking marijuana. Hands shoved deep in his pockets, staring at his feet, Jonathon mutters that smoking helps him feel ‘something’, yet when asked by the school counsellor to name that feeling, all he can come up with is ‘black’. Discovering and feeling what is lurking within or behind that blackness is simply not an option right now.

The police report documents that Jodie’s step dad has been touching her sexually since she was 12. That he told her she was beautiful, and he loved her. That if she ever told anyone about their ‘secret’ he would be forced to send Rusty, Jodie’s dog, to the humane society. Shortly after Jodie, now 15, found the courage to file that statement, her mom threw her out of the house. She says Jodie can move back home when she’s ready to tell the truth. In counselling Jodie cries when she tells you her worries about how her mom will manage if her step dad goes to jail. She shares more concerns about her brother, who she’s heard is getting picked on at school since she left. She never talks about Rusty.

Some pain is just too painful to touch directly. Some words may not be said out loud. How can we help children heal from these wounds that feel too vulnerable and overwhelming to even name?

It is normal, often necessary, and even healthy to build defenses to protect ourselves from overwhelming vulnerability, trauma and emotional pain, just as our bodies would grow a scab to protect a physical wound. These defenses can be what allow us to survive; they give us the ability to function within an otherwise intolerable world. However, in the longer term staying ‘stuck’ in these defenses will stand in the way of our healing. Attempts to challenge and remove these defenses head on usually result in us clinging to them with even greater desperation.

Fortunately there is another way; a way to bypass the walls we build up, and to gently touch the pain in a way that promotes healing rather than building stronger defenses. For our most vulnerable children, for the hurts that hurt too much, for sensitivities that are too much to bear, we can still find our way through, just one step removed.

Tyson, a 6 year old quarter horse, seemed exceptionally quiet and cooperative when he arrived at Healing Hooves. Things that would normally ‘spook’ a young horse did not seem to faze him at all and we wondered if we had truly found what we could call the ‘bomb proof pony’. Yet there were times when Tyson would seem to not be with us; times when he would simply refuse to move or respond to us in any way. 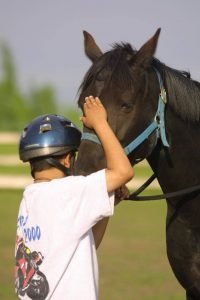 One such time he happened to be working with Jonathon. Jonathon seemed frustrated that day, but claimed he was just tired. Tyson was refusing to move yet again and I, as the counselor, was struggling to hide the frustration that was also mounting inside me. As the tension increased Tyson, seemingly out of the blue, suddenly shoved me so hard with his nose that I nearly went flying across the arena. After a moment Jonathon started to laugh uncontrollably. Tears still rolling down his cheeks, he finally regained enough control to blurt out, “well at least one of is saying how we feel!”

After this incident Jonathon and I had many conversations about Tyson. While Tyson munched happily on his hay beside us we explored why it might feel safer for him to ‘shut down, shut up and shut out’ (Jonathon’s words) rather than to feel. We explored how it may have been exactly what he needed in his past home to be safe, and how this showed how smart and resourceful he was. We started to explore what he needed now to start opening up to some of those feelings, and within which relationships he could do this. We empathized with him about how scary that might be. Not once did we say that any of this might also be true for Jonathon. 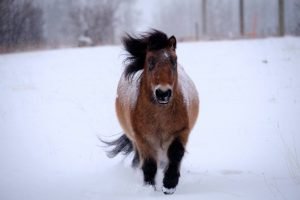 Teddy hides behind a lot of long, black hair. Yet when I pull back that forelock and look into his kind brown eyes I always get the sense that there is a deep well of wisdom in there. Jasmin seems to get the same feeling and she likes to spend her sessions with her arms wrapped around Teddy’s fuzzy, little neck while I tell her stories of his antics. She especially likes to hear the one about the day Teddy discovered his favourite herd member, Cutie, had died. For a long time Teddy was mad at Cutie for leaving him. He stamped his little feet, kicked out at the rest of the horses in his herd, and kept to himself for a long time. He was so mad at the world that he didn’t seem to care who he hurt. But Jasmin knew that Teddy really did care, very much. Tears well up in her young eyes as she listens to the part of the story where Teddy finally lets Skye, the herd leader, comfort him. Jasmin can’t cry about her mom – not yet; but she can now see that there is often a lot of mad to get through before we can find the sad, and that when we find a safe person to be sad with, we can find the rest we need. She hugs Teddy through this part of the story and reassures him that he is a good horse, even if he did kick Skye, and that she loves him. 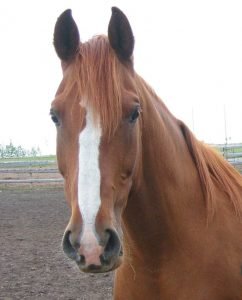 Skye is the leader of the herd at Healing Hooves, and I used to see only strength in this. After a rough start in life, Skye grew from the scared horse at the bottom of the pecking order, into a nurturing caretaker who seems to sense vulnerability in a horse or person and moves to take care of them. He truly is a wonderful therapy horse and leader who has brought hope and comfort to many. While all this is true, there may be another aspect to Skye; one which took me a little longer to consider. What if one of the reasons he always moves to be in charge is that he does not trust others to take care of him? Those who were supposed to protect him when he was young either hurt him or let him down; so perhaps being in charge means being safe. Fortunately for us, and for his herd, this has turned him into a caretaker rather than a bully. When he senses vulnerability he moves to nurture rather than to exploit. Wonderful for his herd, but what about for Skye? What we used to see purely as strength is also an insecurity which denies him rest. While Skye is taking care of everyone around him, who does he allow to take care of him?

Jodie first learns about Skye as we read a story about him and Teddy. Teddy feels wonderfully taken care of by Skye, especially at nap time, but notices one day that Skye never seems to get a nap himself. The harder Teddy tries to help Skye by taking charge of the herd himself, the more work he seems to make for Skye. Skye never seems to find the rest that Teddy, a wise little Shetland pony, knows he must need. Later, as Jodie and I groom Skye with Teddy watching on, Jodie talks about the fear Skye must feel. Maybe he really wants to trust us to be there for him, she muses, and maybe he knows deep down that this is how things are supposed to be; but she knows his fear of being hurt again is so much bigger.

Over time Jodie spends more time with Skye and sees the moments when he leans on me. One day she notices his eyelids begin to droop and his bottom lip start to quiver. In that moment perhaps Jodie realizes that Skye does have a safe place to find rest, and that sometimes he even lets himself go there. Hopefully deep down she knows it can be the same for her some day too.

In time, these children will hopefully be able to talk more directly about why they learned to stop feeling; and to start to feel again. Pushing this now is unlikely to work, and risks causing more harm, as the north wind discovered in Aesop’s classic tale when he tried to ‘blast’ the coat off a man walking through a park, and the man clung to his coat all the more determinedly.

Instead, through the horses and their stories, we invite that process gently. We touch a child’s pain indirectly, we talk to and about the horses, and we read their stories.

Like the warm sun in Aesop’s fable we start to melt some of those defenses without needing to name them. And in time, just as the man in the park removed his coat in the warmth of the sun, we start to heal their hearts, one (horse) step removed.